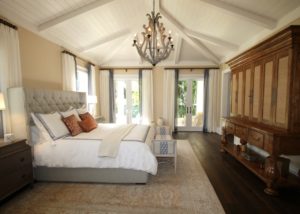 Ceiling medallions became popular in Victorian homes in the 1800s.  As they were typically custom made of paper mache, plaster or wood, they were more popular with the upper classes.  They could add elegance to the ceiling, focus the eye on a fancy chandelier or lighting fixture and generally add a sense of sophistication to the room.  As time has gone on, ceiling medallions came to be mass produced and constructed of much cheaper materials such as polyurethane foam.

Before worrying about all the decorative motifs that are available in the ceiling medallion world, get an idea of what size will work best for your room and light fixture.  You want a piece that’s proportionate with the ceiling, complements the fixture and doesn’t end up becoming the focal point of the room itself.  One equation that’s used by many interior designers is to divide the square footage of the ceiling by 7 giving you the size of ceiling medallion that should fit the room properly.  Of course this isn’t an immutable law, but it will give you a good starting point.

Because many ceiling medallions are now mass produced, there’s a huge range of styles and designs that are very affordable.  But that doesn’t mean you should buy the gaudiest one you can find or afford.  Take a look at the other features of your room.  If you already have crown moulding, baseboards or other trim in the room, your ceiling medallion should match those pieces.  Also take into consideration your lighting fixture, furniture and flooring to try to get something that complements these items.

Crown moulding can be used to quickly and easily accessorize areas of your home that would require a full renovation to attain similar results. With the proper tools it’s quite easy to install while lending a feel of classic styling to the room. That said, maintaining consistency when it comes to crown moulding is important. Homes that have crown moulding also typically have other types of trim work such as baseboards and wainscotting. In this article we’ll go over three crown moulding ideas for your home. END_OF_DOCUMENT_TOKEN_TO_BE_REPLACED