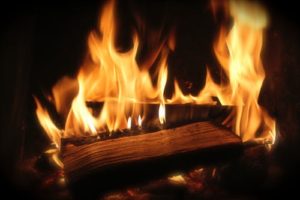 Humans have always been fascinated by fire.  Even more so when that fire can actually occur in your living space.  It’s been found that houses on the market sell faster when they feature a fireplace.  And why wouldn’t they when the buyer is envisioning themselves cuddled up with their family in front of a roaring fire on a cold winter’s night?  But the fact is that fireplaces cost money. Not only in installation costs, but in fuel, maintenance and lost heat. So to get the most out of your fireplace you may be wondering which type of fireplace is most energy efficient.  In this article we’ll rank the three main types of fireplaces in order of energy efficiency.

Gas is a clean burning fuel, but it still requires a chimney.  This allows some of the heat that’s produced to escape the house.  The fact that gas doesn’t produce soot or ashes means that they’re easier to maintain than wood fireplaces.  Natural gas is relatively cheap and although a natural gas fireplace will cost more to run than an electric fireplace, it will cost less to run than a wood fireplace.

Wood fireplaces are the least energy efficient types of fireplaces.  Wood is a relatively expensive fuel that can cost three times as much to burn compared to an equivalent gas fireplace.  Not only do wood fireplaces lose more heat up the chimney when compared with gas, wood fires have a tendency to draw warm air out of the room making them even less efficient.  Burning wood releases ash, soot and other pollutants which results in the need for more maintenance and regular cleaning of the chimney.

Which Type of Fireplace is Most Energy Efficient?
admin July 13, 2019 Blog No Comments