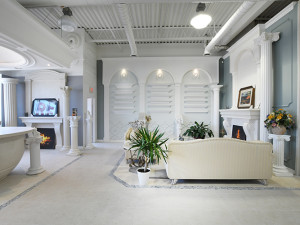 Ceiling medallions first became popular in Victorian-style, middle and upper class homes in the 19th century.  The decorative feature was attached to the ceiling and used to accentuate the light fixture or chandelier. Ceiling medallions have become popular again in the 21rst century and are often used in large rooms as a novel decorative addition.  They also have a practical purpose of covering the unsightly ceiling box of a light fixture. Getting a ceiling medallion that works best for your room isn’t quite a scientific endeavour, but there are a few tricks of the trade that can be used when deciding how to choose the best ceiling medallion.  Read more to find out how.